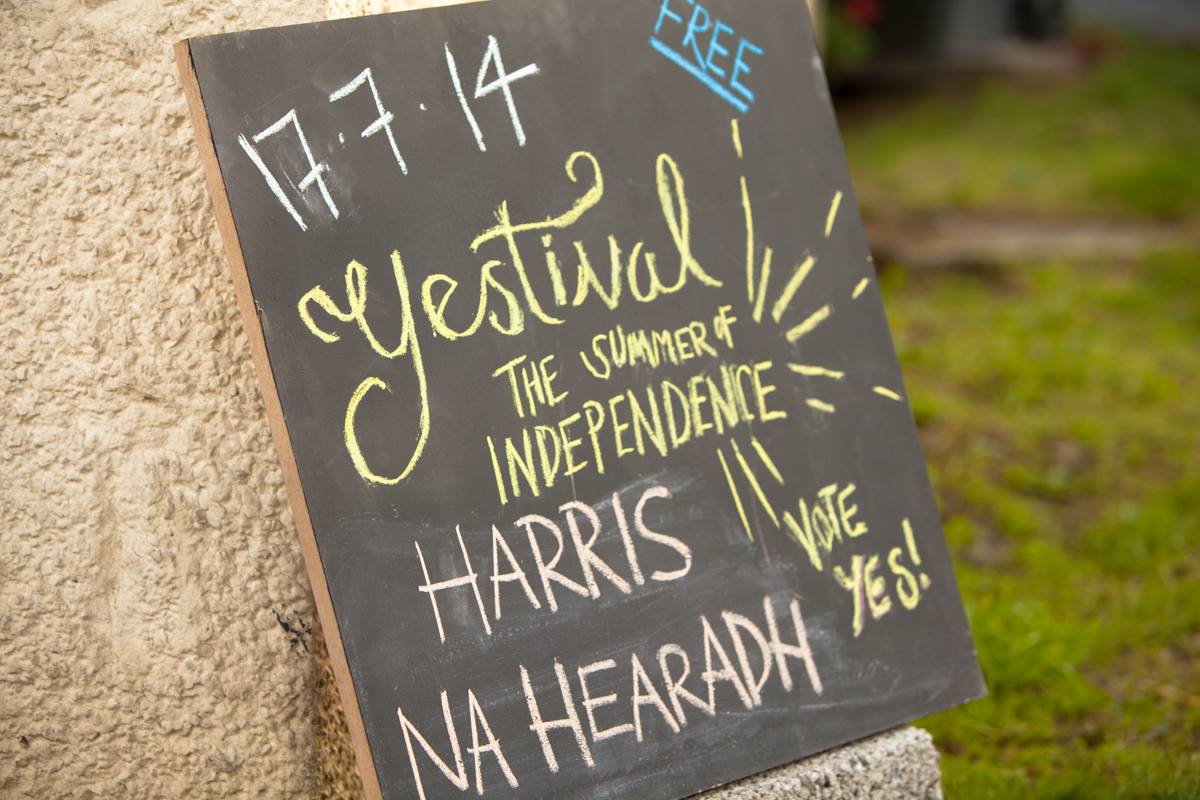 After a great night on North Uist and the wonderful hospitality of Morag and Gina MacDonald in Baleshare, we packed up our tents and were on the road again to catch the afternoon ferry across to Harris.

It was a beautiful drive up the island towards Berneray and Zara was particularly tickled by the road sign warning of ‘otters crossing.’ Tensions were high as we waited for the ferry. It was touch and go as whether or not the Yestival airstream would make it, but as it turned out, there’s no stopping the silver bullet and our photographer Robb McCrae was able to take the photo he had dreamt up months ago!

Kieran Hurley and Julia Taudevin had joined us the night before in Uist. Fresh from touring San Paulo and New York, they told us they were gutted to have missed the chance to be on the same bill as Dick Gaughan – a man so humble that he doesn’t seem to realise just how much of a hero he has been for so many people. The conversation on the ferry turned to a discussion about other such cultural heroes in Scotland – Liz Lochead, Michael Marra and Martyn Bennett among them. Kieran talked to us about the privilege and process of creating ‘Grit,’ a play about the life of Martyn Bennett and his Brave New Music, and the magical synchronicities of discovering Martyn’s favourite sunsets.

Faithful CalMac delivered us safely on to Harris and we took a left turn on the road to Tarbert. We were lucky to have our very own tour guide with us, Dòl Eoin MacKinnon, who grew up on Scalpay in Harris. He treated us to an entertaining running commentary, telling us stories about his childhood, the standing stones, the last school closing at Seilebost, about his grandfather who still lives in a cottage with a garden at Horgabost and about the place where he will come home to build a house one day. 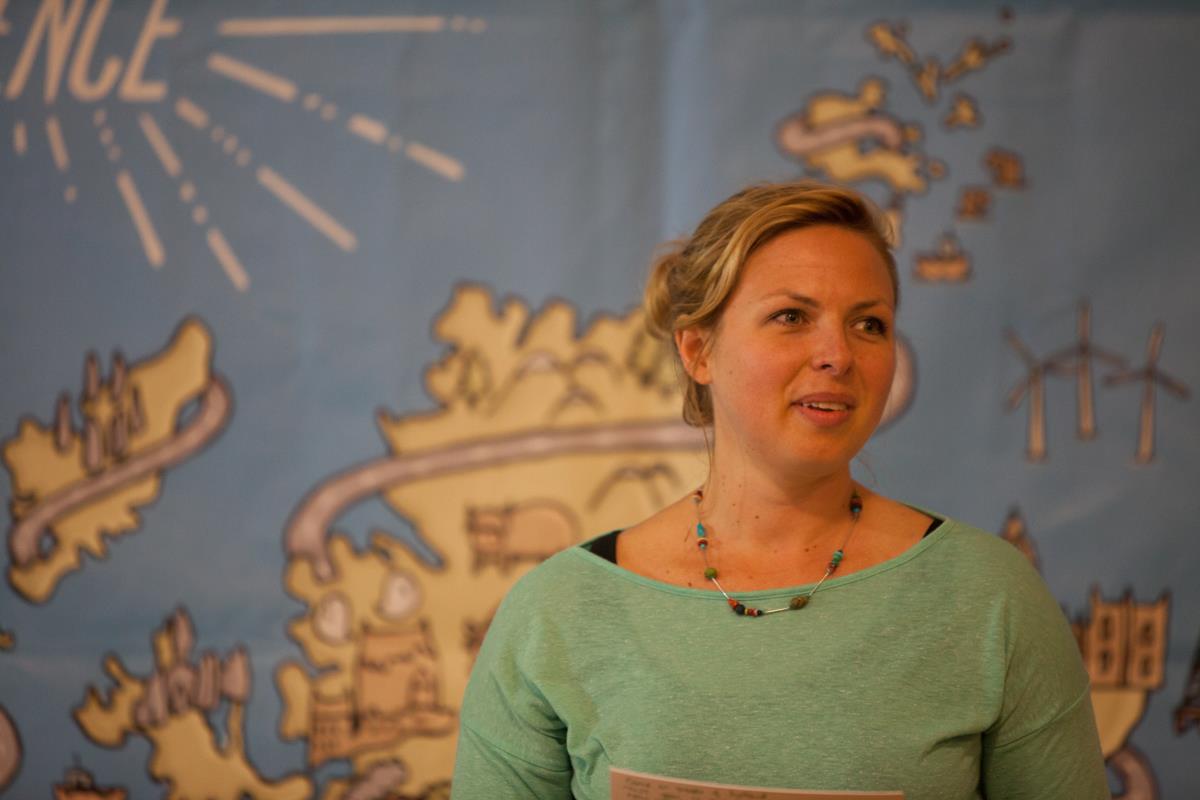 The evening event in Tarbert community centre was filled with really special moments. For many it was a favourite event of the tour so far. It might have had something to do with Julia’s smile. The crowd were beaming enjoying her wonderful performance which included her inspiring and international ‘Journey to Yes,’ which began in Australia in 1979. In the spirit of democracy and the referendum, she then asked the audience if they would like to hear a song about love or a song about rebellion. With an outburst of knowing laughter, the audience unanimously voted for a song about rebellion, and she offered a rousing rendition of the ‘Ballad of the Clyde.’

During the break we met a local man, Donald, who was delighted to see us and who told us that we were in the very hall where the very first performance of the legendary touring play ‘The Cheviot, the Stag and the Black Black Oil’ had taken place in 1979. He had only been a boy of 14 at that first performance but he said the experience had never left him. It was a beautiful synchronicity. Last summer, National Collective invited Dolina MacLennan – one of the original members of the touring party – along to a showing of the film to talk to us about her experience. Here we were where it all started; all part of the same story.

Later in the evening, Kieran read a passage from his recent play with the National Theatre of Scotland, ‘Rantin,’ created along with Julia, Gav Prentice and Drew Wright. In conversation with Kieran close to midnight on the ferry crossing the Minch (an experience described in the play itself), I asked him about the links between past and present and Rantin’s self-conscious reference to the The Cheviot. Rantin, of course, was written as a ceilidh play in a kind of homage to that very special moment in Scottish theatre. What would a 21st ceilidh play for Scotland look like? What would have to be done differently to speak to our time, and our fragmented political conversation? Bill Paterson opened The Cheviot with the line and linear narrative, “This is a story with a beginning, a middle and as yet no end.” Rantin begins, “This is a story with multiple beginnings, an abundance of middles and no clear end.” Rantin in form was written to contain the multiplicities and contradictions of our time with space for ideas to co-exist, which is ultimately what a nation is. The ceilidh play form lends itself beautifully to such an expression. 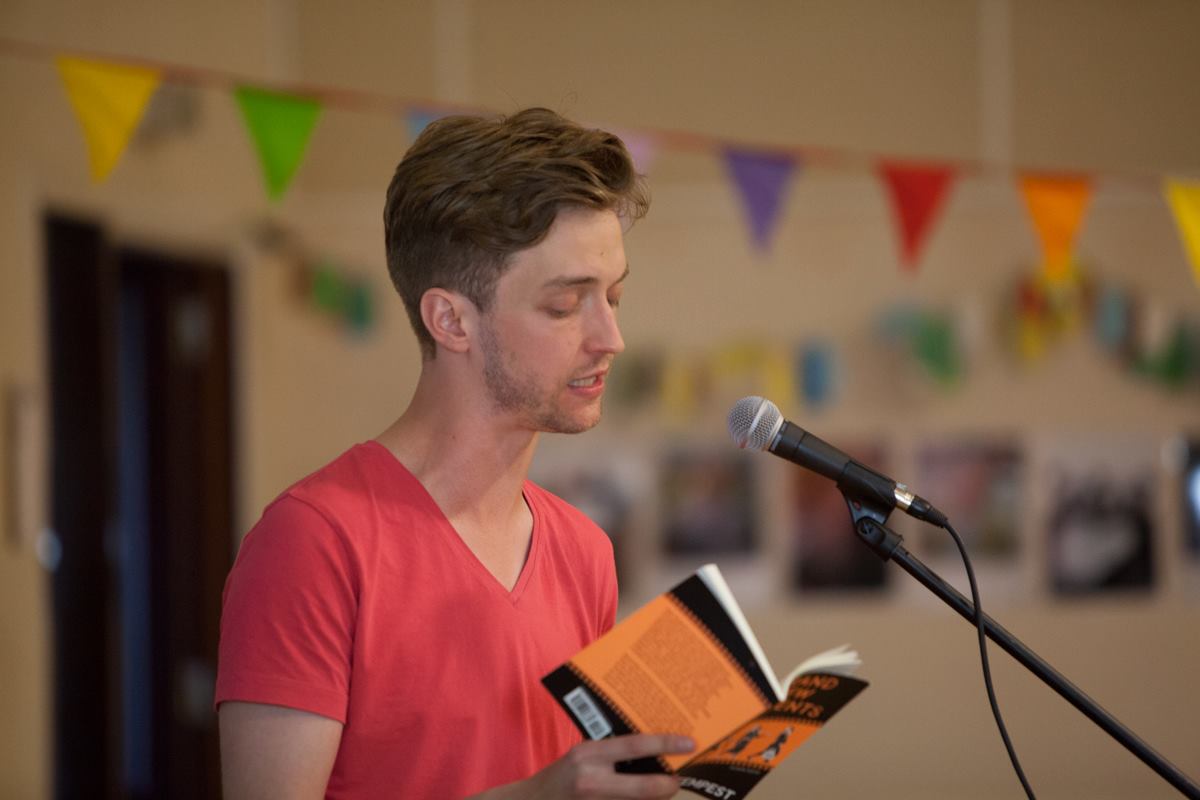 The passage Kieran chose to share in Harris was about the experience of an islander leaving Lewis and going to study in Glasgow, and was accompanied by Julia’s hauntingly beautiful voice.

Of course, this was a home gig for Dòl Eoin, now based in Glasgow, who closed the night for us in style on the last night of his time with the Yestival tour. He sang his newly composed referendum song ‘Be Your Nation,’ joined by Josephine Sillars.

“This country is yours, this country is mine
Our future decide by the strength of your mind
Oh come let’s rejoice for we have a choice
To be a nation, Scotland’s voice.” 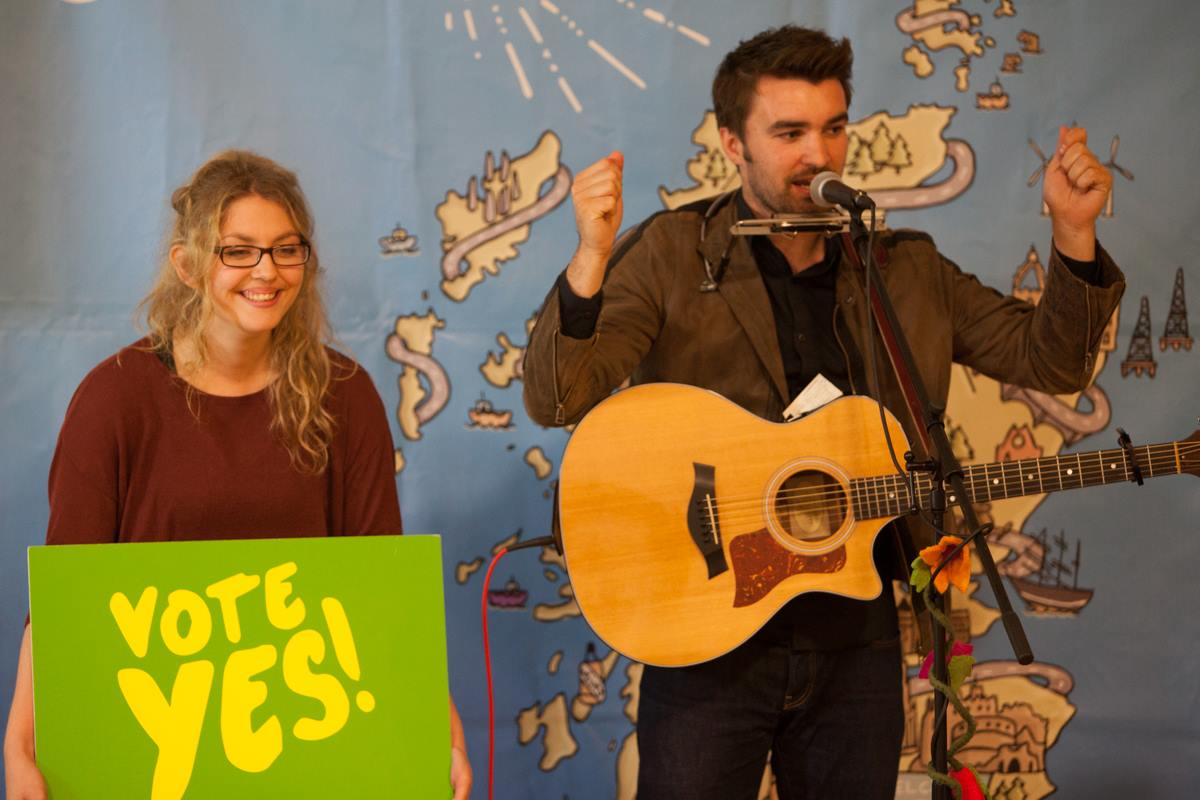 After a plea for an encore from the audience, Dòl Eoin finished with a defiant and impassioned song ‘An Gairm’ in English and Gaelic, composed after a dream he had had about the Gaelic language dying. Kieran observed that while in many ways very different and operating in very different socio-cultural landscapes, singer-songwriter Dòl Eoin is doing for 21st century islanders what Gav Prentice is doing for young people in the post-industrial central belt, giving voice to a new generation. Both artists are taking part in the summer of independence Yestival tour, helping us tell the story of modern Scotland.

The team was tired but feeling energised by the happenings of the day. Our camp for the night was a wee way away at Horgabost campsite. We drove home under orange and purple skies and the shadowy silhouettes of the Harris hills reflected in the silvery light of the moonlight on the water. On the radio in the background was a tribute to Michael Marra which made me smile, another one of the many small coincidences of the day and reminding us of conversations earlier about Michael Marra’s working model of the One Big Thing. Some of us climbed straight into our tents overlooking the bay for some much-needed kip. Others (in the spirit of ‘we only live once!’) built a fire on the beach under a perfect half-moon in the sky and passed round a quaich of whisky sharing songs into the small hours. 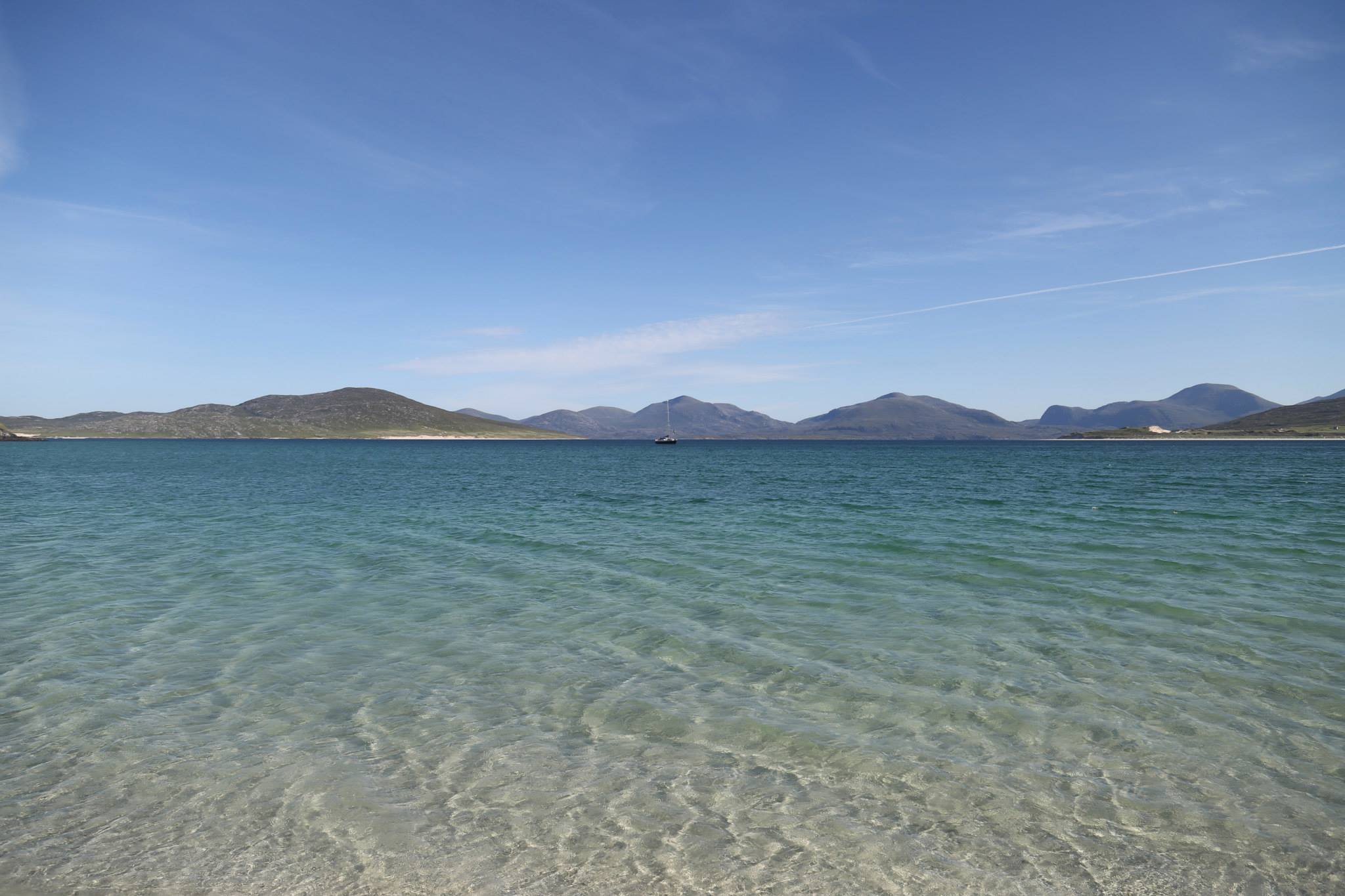 We awoke the next morning to the smell of yellow bedstraw and island paradise. The lagoon bay was in full glory: turquoise waters sparkling in the Hebridean sunshine. It reminded me of a favourite poem of mine.

A High Blue Day on Scalpay

this is the summit of contemplation, and
no art can touch it
blue, so blue, the far-out archipelago
and the sea shimmering, shimmering
no art can touch it, the mind can only
try to become attuned to it
to become quiet and space itself out, to
become open and still, unworlded
knowing itself in the diamond country, in
the ultimate unlettered light.