After a sunny goodbye to the Hebrides, we boarded the late night ferry in Stornoway across the Minch. Delayed by an hour, we arrived late into Ullapool well after midnight, tired but feeling energised after the early morning swim in the clear waters of Horgabost beach. In the dark we could make out the shadows of the surrounding landscape, dominated by mountains Bheinn Ghobblach to the west, An Teallach to the south west, Beinn Dearg to the south east close to the head of Loch Broom, and Ben Mhòr na Còigich to the north.

We were greeted by the wonderful and inimitable Jock Urquhart. He showed us to our camping spot in Broomfield campsite with style, running ahead of the van in the beam of our headlights – quite a sight to behold! Jock was our host for our time in Ullapool and, with the busy wedding season in full swing, we were very lucky to be in his generous and safe hands. After we had pitched our tents in the dark, he welcomed us in to the Ceilidh Place – at the end of the A835 and the centre of the Universe – for a pow wow in preparation for the following day’s events.

Ullapool has a strong reputation as a centre for music, the arts and performance. The Ceilidh Place is one of the main reasons for this and is a unique and truly magical place. Started in 1970 by the actor Robert Urquhart, intended as a place for eating, meeting, talking and singing. A place to be. A place where not only postcards but life histories would be written. It has since grown into a meeting place, arts venue and hotel run by the Urquhart family. From the outside it is a row of white washed buildings set back from the street, with roses and lavender growing for the bees; inside it serves wonderful food, whisky and beer. Here you can find one of my favourite independent bookshops, a treasure trove celebrating and promoting Scottish literature and offering an eclectic range of titles covering history, music, poetry, politics, natural history, travel writing and biography.

After an early morning meeting we set up a pop-up shop and exhibition on Argyle street for the day, opposite the local Saturday market. The place was buzzing with folk popping in to find out what we were all about. We had a visit from a pair of holidaying German bikers who talked to us about our reasons for independence. They were surprised to learn that our vision and desire for a Yes vote is based on logical and progressive political arguments and not at all based on a romantic view of the past. The Ceilidh Place Clubhouse was the venue for our afternoon matinee showing of the new film ‘Scotland Yet,’ a feature length documentary focussing on the many voices and personal stories of the referendum debate. This campaign is relentless, fast-paced and for many it is as exhausting as much as it is energising, and having the space to sit back for 90 minutes to reflect on how far we’ve come was quite a moving experience. Two sentiments from the film stuck out for me. One that struck a chord was Lesley Riddoch’s who said, “People are giving their whole selves to this, and that’s brave, because it might fail.” The other was the passion of Robin McAlpine: “If Scotland gets defeated in this referendum because Better Together forced us onto our knees, Scotland will be on its knees for a long time; if we win this because we stand up tall, Scotland’s going to be a nation of people who stand up tall very quickly.”

A quick turnover and we were ready to set up for the evening amid organised chaos. It was a hot and humid evening and we had starting to flag a little with the pace of the tour. Thanks to the generosity of Jean Urquhart and her new kitchen, we enjoyed a colourful West Highland curry along with some of our evening performers. For 8pm we were ready to roll and it was the turn of Ròs Hunter to host the evening’s event. We were delighted to welcome musician and composer Mairerad Green, who grew up in Achiltibuie on the West Coast Coigach peninsula of the Scottish Highlands. She treated to us to a magical performance: a cheeky pibroch farewell to the UK played on the box,  a set of fast-paced reels with hope for the new Scotland and a blast on the highland pipes accompanied by Iain Copeland. We were also very lucky to have John Purser joining us for the evening, a man who has done so much for our understanding of Scotland’s music through his writing and broadcasting. Born in Glasgow to Irish parents, he told us he still travels on an Irish passport – well, until the time he can get a Scottish one! He had travelled down from Skye from his croft to be with us that evening and had happened to pick up a couple of Danish hitch-hikers. He explained to us that he was a little late in turning up because he had taken a small detour via Applecross peninsula, adding several hours to the journey! The couple hadn’t been sure where they were headed that evening and John had convinced them to come along to our Yestival event. It turned out that two days prior  the couple had become engaged in the Cuillin Hills. With a toast and a cheer from the Yestival crowd we gifted them a memory not to be forgotten! 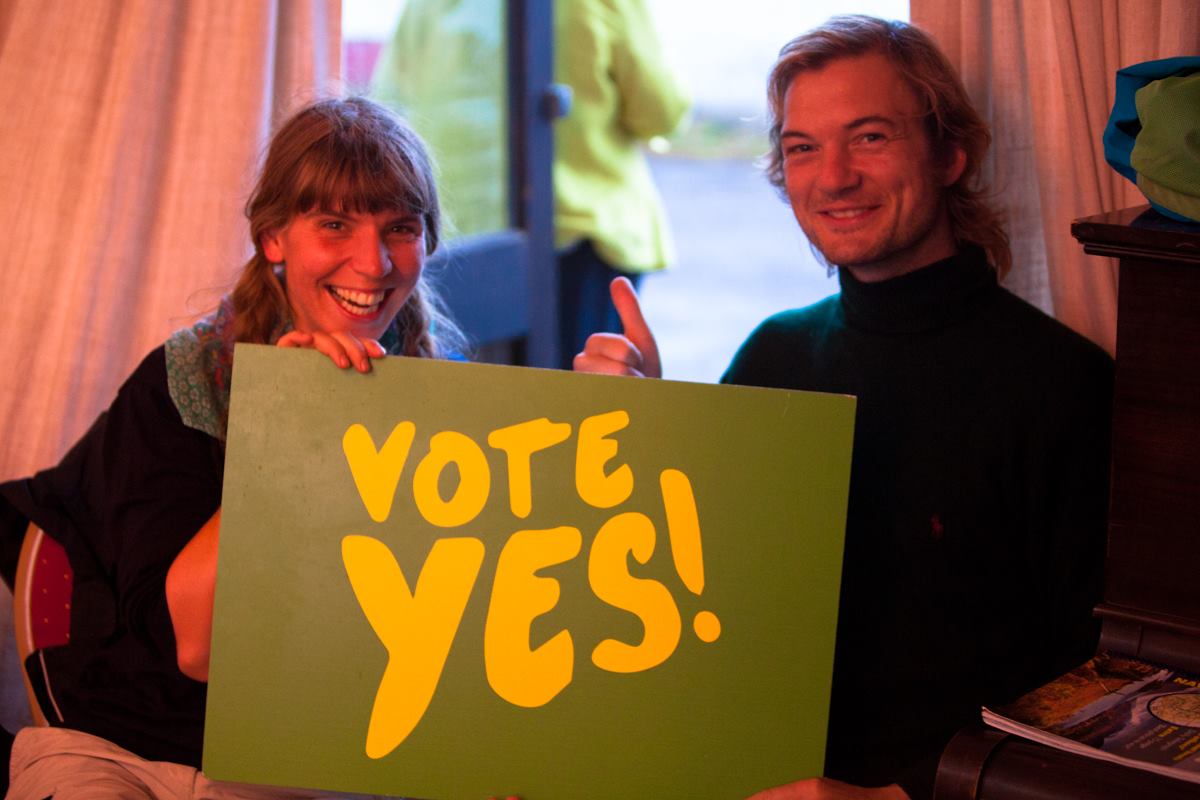 Up next was the Caithness poet and playwright George Gunn, from Thurso in the north east of Scotland. He read a newly-composed poem, ‘Scotland’s Bones’ as a tribute to Hamish Henderson. We also witnessed a piece from his collaboration with Iain Copeland, the mesmerisingly beautiful ‘A Walk in Strathnaver.’ Rona Wilkie and Marit Falt played us some beautiful Scandi-Scottish tunes to round up the evening, joining us for two nights of the Yestival tour. There was a wedding taking place in the Ceilidh Place that night so the team made a mad dash along to the Argyle Pub for last orders where we sang a few songs, including Euan Campbell and Duncan Sneddon’s re-imagined ‘Ye Unionists by Name,’ now a firm favourite of the Yestival touring crew. With style, we were treated to some of Jock’s legendary improvised poetry, a clever way to move us on out of the pub! We wandered home under a tangerine half-moon, some of us eaten alive by midges, but all in very good spirits.

The following morning we were treated to breakfast in the Ceilidh Place and a few of the girls were chatting to Jean Urquhart. She shared some stories of her formative experiences leading her to campaign for what she believes in. She spoke to us of a visit to Eastern Europe during the Communist era and the experience of watching a group of young school children sing ‘My Love is Like a Red Red Rose’ in perfect Scots. With this came the tearful realisation that while Scottish culture is celebrated across the world, there was such a lack of knowledge and celebration at home. Jean, of course, has played a huge part in raising awareness and supporting the traditional arts in Scotland since the 1960s. She reflected on the beginnings of the Fèis movement in Barra in 1981, the incredible legacy of that movement today and the overwhelmingly positive effect it has had in communities across the country.

Jean believes that it is the artists – the writers, the poets, the musicians, the singers and the storytellers – who we must thank for articulating, expressing and confidently thinking about who we are and who we could be in the future. Politicians, she says, are only ever able to follow; they can only ‘react’ (they haven’t time for anything else!). The artist is constantly refining and defining and articulating the situation for the politician, and, in Jean’s view, they are the people that we absolutely must listen to. Cultural confidence is one of the main reasons I’d love to see an independent Scotland. Collectively we need to rediscover – or in some cases discover for the first time – this part of the planet we call Scotland, with all its cultural richness. In the words of a good friend, Steve Byrne, we need to learn to sing our own song again.